Free Ships For All!

So after some thought, I've decided to release almost all of my ships to the public! This pack will include 20 ships that people are free to use! Here's the pack, and the current "flagship" ship would be the Ulfberht, a ship which I've updated for EA and to be more user-friendly.

It's important to keep in mind that a lot of these ships are outdated, and will need to be updated once the manual free welds have been added to the game. Also, only download blueprints from my posts. I will never force you to pay for the blueprint, and I will always redirect you to here. If someone else is distributing my blueprints, then I'd suggest reporting them as it's most likely a stolen blueprint. Do not trust anyone other than me to give you advice on my ships. There are many who will try to deceive you and say that ships like the Ulfberht don't work at all.

If you want to contact me, you can do it through Discord or the In-game mail system.
Discord: Kodey#5272
Discord Server: https://discord.gg/cRjeJkvAqw
In-game: Kodey
I AM NO LONGER ON THE MAIN SB DISCORD SERVER! IF YOU HAVE ANY QUESTIONS, PLEASE JOIN MY SERVER OR SEND ME A FRIEND REQUEST (Kodey#5272)
Last edited: Feb 4, 2022

Quick update! I've made an Imgur gallery so you can see what each ship looks like.

If anyone downloaded the Ulfberht, that version had a power problem that I've fixed.

If you're looking to fix the power problem for a version you already downloaded, to fix an older version, find a YOLOL chip that connects to the FRL buttons on the left side and change the lower value to 50

Thanks for sharing the blueprints and I can see from the screenshots how well made they are, so keep up the good work on making more designs

Thanks Kodey. You are a respected community member.

Thanks zaloomy this will help me with design ideas in the future.

Quick warning, there's been an update to the PTU that causes an overlap problem with some thin floor plates. I'll try to get it fixed tomorrow before the event.

If you want to fix it yourself you can just enable this setting to see what's overlapping. 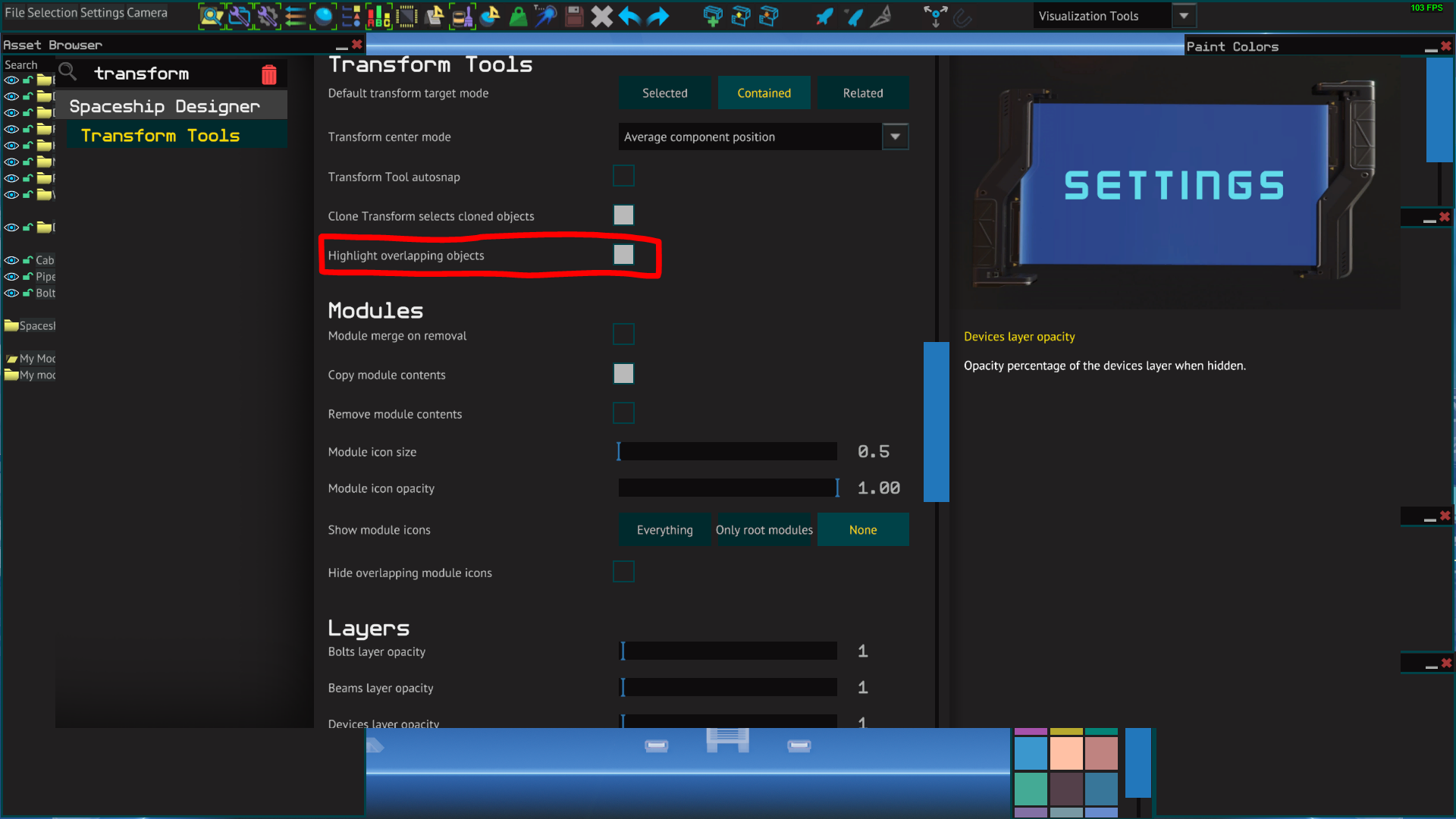 The Ulfberht has been updated to work on the PTU, if you haven't already fixed it, then I suggest downloading the updated version here.
Additionally, you can join my discord if you prefer to see updates there.

*FS* said:
I dig your ships i'm kinda scared to mess with game files but thx u for the offer
Click to expand...
It's not really that bad, as the save folders are seperate and only contain saves (so nothing you can break unless someone hid malware inside the .fbe file, which I doubt at the moment) and if you are not currently working on something I would suggest the autosave folder (%appdata%/Starbase/ssc/autosave and then just increment the counter, your import is then at the top of load from autosave, even if the dates don't align or the whole field is empty) as I don't know the naming convention of the blueprint saves (%appdata%/Starbase/blueprints)

And I've seen the Ulfberht when a group member spawned it in the designer (via module) so we could have a test fight. Impressive ship and takes a good bit of concentrated fire to blow, at least from and compared to the small fast travel compatible (read: have room to carry one for transit) fighter we were putting together.

Small update for anyone looking for support and can't message me.

I am no longer on the SB main discord server, please friend me or join my discord if you have trouble contacting me.

Added the Union Jack for all of your tea needs

I've updated the Ulfberht with some of the PTU additions, including support for heat mechanics. Currently, I'm only supporting the Machine Gun variant, but if you prefer burst fire it's easy enough to edit the gun names.
https://drive.google.com/drive/folders/1OH2zRk3KD_4lcSv1Oh0VgruGerBrgTfz?usp=sharing
You must log in or register to reply here.
Share: Facebook Twitter Reddit Pinterest Tumblr WhatsApp Email Link
Top