Sieges are coming to PTU

Forever locked into The Pool 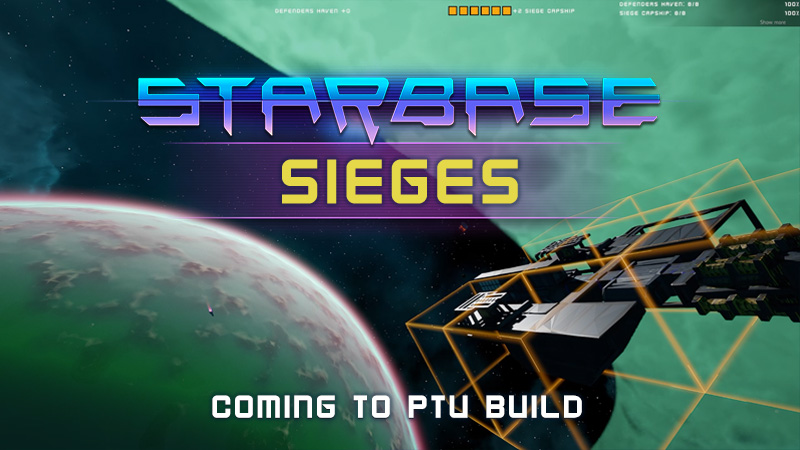 The first iteration of sieges are bound to arrive on the PTU very soon! Siege battles allow launching attacks against space stations with military capital ships. During these fights it is possible to end up capturing the enemy structure and taking ownership of it.

There are many requirements for a siege to be possible, and we have listed these and other important information on the Starbase Wiki: https://wiki.starbasegame.com/index.php?title=Siege

Siege features planned for later:
• Possibility to siege moon bases, and later possibly other capital ships as well
• Set amount of capital ships can join to assist either side in battle
• More clear company interactions for siege after company owned stations are available
• Possibility for unaffiliated capital ships to join the battle

Missing functionality:
• Factory halls will be disabled in siege, but this is not implemented yet. The halls can cause weird behavior currently, especially with large player count
• There are currently no warzone limitations for other stations/capital ships inside or near the warzone regarding entering or exiting them. Warp related restrictions are already in place
• In general, as sieges can draw a lot of players to the same place, we likely need to create some type of additional limitations that prevent large numbers of players congesting in same areas causing connectivity issues and lag. We are looking for more data and feedback from the PTU sieges before deciding on the need and design of these limitations

This feature is still heavily in development, so we appreciate all feedback and bug reports to ensure we can better the siege experience before bringing it into the live branch.

Drstarke said:
so how do you defend a station with tripods without a factory hall as mentioned before
Click to expand...
You can attach tripods to the structure of caps, I think the same applies to stations

Drstarke said:
so how do you defend a station with tripods without a factory hall as mentioned before
Click to expand...
you can already attach tripods to stations from anywhere its not a factory hall thing

Drstarke said:
so how do you defend a station with tripods without a factory hall as mentioned before
Click to expand...
You only need factory halls to use full-scale turrets.

Are you going to make this?

At everyone saying tripods can go anywhere on stations: How are they powered without factory halls? Do tripods work at full power on stations without a resource bridge connection?

Also, is it possible to 'demolish' a station completely rather than capture it? - i.e. remove the station block instead of taking it over.

removing the core wouldnt demolish the station. it will still be in a derelict state and in ownership

So is there no way to completely remove a station then? If not, isn't that open to abuse by groups spamming station blocks around other people's stations?

well you have a ownership limit and those derelicts can be claimed and used by other people. and a future station cluster mechanic

kiiyo said:
Station cluster?
Click to expand...
Station cluster is a group of stations that form a special, large Safe Zone that can span several kilometers. Via clusters, it's possible to control bigger areas and for example set Safe Zone rules and taxes to mining and trading.
Click to expand...
Progress Notes: Week 12 (2022)
You must log in or register to reply here.
Share: Facebook Twitter Reddit Pinterest Tumblr WhatsApp Email Link
Top