Slides and hinges should really be flexible for players to build ships and systems they want. To do that I propose the following changes to a unified and extendable system: 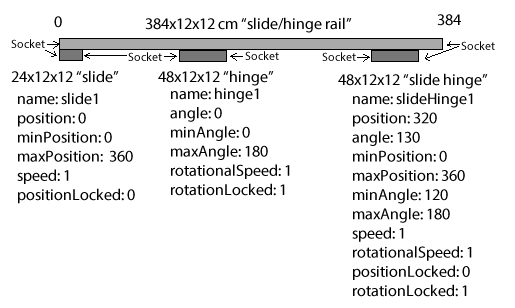 A "slide/hinge rail" is a generic part that is Nx12x12 cm long where N is a multiple of 12 starting from 24. So 24, 36, 48, etc with a large upper limit. This could be extended to Nx24x12 and Nx24x24 rails also for more applications. Sockets on either end would transfer power and communication to the rail.

A "slide" snaps to any rail - on any of the 4 faces - and and moves linearly along it.

A "hinge" snaps to any rail and can rotate any parts attached to it. It doesn't move and has a fixed position.

A "slide hinge" is a combination of both a slide and hinge and moves along its rail and can rotate. Anything attached to it would move and rotate with it as expected.

The slides and hinges are Nx12x12 and can be sized in multiples of 12 to suit the required use case. If larger rails are added then larger slides and hinges would exist also that snap to such rails. These could support different stresses. So if you had a 192x24x12 flat rail then on two of the 192x24 faces you could connect Nx24x12 slides or hinges. On the two 192x12 faces you'd connect regular Nx12x12 slides.

Constraints: Multiple slides and hinges can exist on a single rail, but they'd collide if told to move into one another as expected. All of the above mechanisms have limits that can be set for position and rotation. Just like current slides, the slide can extend past the end or start. This would require at least 12 cm of overlap as shown below.

Locking: The mechanisms would also have a lock feature that fixes the position and/or rotation of the mechanism in place essentially making it one with the slide rail. (This would make it a single physical object).

Power Transfer: The slide/hinge mechanism would have a socket on either end that allows power and commands to easily transfer through the rail to anything attached to the slide. This assumes cabling is be refined more later for such applications without tricks.

Pretty much all the applications are similar to the current slide and hinges except they're more flexible and less bulky allowing them to be integrated in more places. Being able to pass power and communication through would make a lot of things simpler.
Extensions for the future:

There's a lot of other mechanisms that could be attached to a rail. I'll cover one which is a motor. This works like a turntable mechanism already in the game but would be much more generic and smaller.

A rotational motor that acts like a hinge perpendicular to the rail. There would be a "motor" and a "slide motor" where the motor just rotates and the slide motor does both. 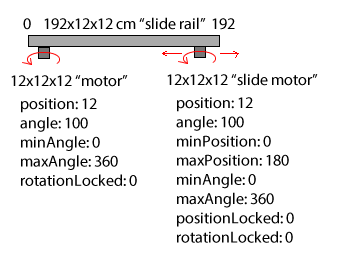 Applications for this would be you could just use a single slide motor and rail to build a pilot chair that rotates around and moves forwards and backwards without using any other larger mechanisms. (Once the pilot seat animation is in one of either start or end positions controlled by YOLOL the code would set both the positionLocked and rotationLocked to 1 and it would be solid not requiring as much physics resources ideally). This design is compact and would allow it to be applied to multiple seat ships. One might need to use an Nx24x24 rail and 24x24x12 slide motor to support the stresses.

Other applications would be mechanical shutters that rotate open and then collapse. Imagine say 2 rails on the side of a window with 3 motors each holding a 192x72x12 panel each. They could each rotate open then translate up. 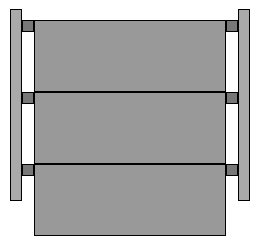