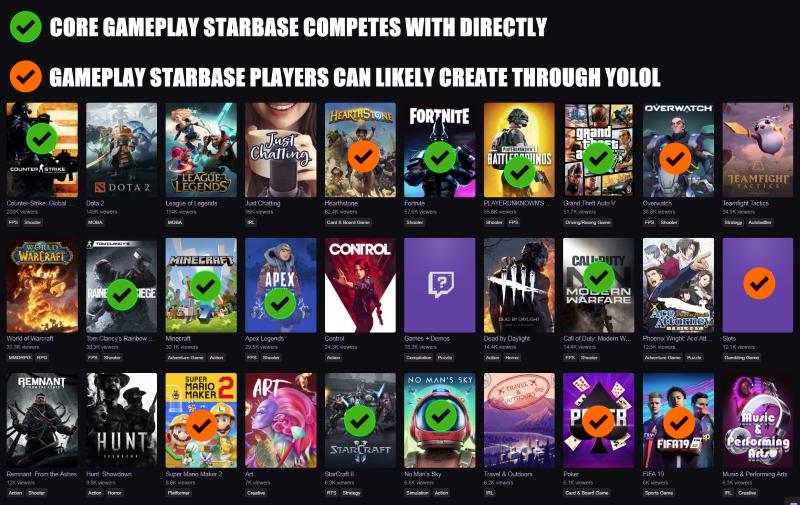 Almost nothing else worth playing until Starbase... PepeHands

I see the comparison to the FPS games since starbase has FPS component... but Starcraft?

Atreties said:
Starcraft?
Click to expand...
For players standing back on the battlefield, it will be like an RTS. Not for most players, but Starcraft is not for most players either. Players who want to manage their forces against other large groups, whose sole purpose is to consume as much resources and leverage those resources as armies against other players, will get that similar kind of gameplay - less NPC/AI involved and more direct player control (some games have done this in the past, combining FPS and RTS, to differing degrees of success). Empires Mod is a game that comes to mind which I played, but there are many others. Of course, Starbase won't give them micro control to the same degree, but it's more the management aspect and less the actions-per-minute aspect. Gameplay might also be 15 days, versus 15 minutes, in length.

For example, this kind of player would be analyzing all the resources available, and will find efficiencies like knowing they can build 500x laser-based weapons, or 1000x autocannon based weapons, and will make calls as to which weapon type gets the most value in a conflict, against an enemy who they are getting live scouting information about who may be using X or Y type of armor. It will be a very valuable skill in large group warfare.
Last edited: Aug 25, 2019

You can make Overwatch with YOLOL? Now you're just trolling.

Azelous said:
You can make Overwatch with YOLOL? Now you're just trolling.
Click to expand...
Yeah the core gameplay is team deathmatch, and capture and hold or escort can be simulated with Starbase assets and YOLOL code.

Vexus said:
Yeah the core gameplay is team deathmatch, and capture and hold or escort can be simulated with Starbase assets and YOLOL code.
Click to expand...
If you ask me this is searching a tad far, yeah its possible but why even?

Saltylelele said:
If you ask me this is searching a tad far, yeah its possible but why even?
Click to expand...
Games compete with one another for playerbase. All the shooting-game FPS games pull players from each other. It's a popular genre but as you can see, lots of people like different flavors of "shooter game" to suit their play style. Some like a 3-minute Overwatch game, others like structured 5v5 CS:GO matches, others like battle-royale based shooters, and some like survival-shooters like Rust. The core gameplay for these is basically the same, and as such FPS games are generally popular from just having a bunch of interesting weapons and ways to kill your enemy. Only the flavor of how you shoot to kill your enemy really changes, and what you do before and after that event. Basically, if you took the gun play out of any of those games, those types of games are completely dead.

Starbase is an MMO but doesn't compete with WoW because WoW has quests, a story, a world to explore, end-game raids and is level and loot based. So it's not included as a competitor, although people who enjoy the persistent world of an MMO might enjoy Starbase.

So what I'm pointing out is that, since Starbase is a competitor with the big-deal FPS games, and also competes with Minecraft, and competes with spaceship style gameplay like No Man's Sky and so on, it's in an amazing position to grab a lot of market share because it has a little for everyone. Combined with the online game world, you get the WoW-style meaningful gameplay where your faction depends on you (like WoW groups need their 40 people for an end-game raid). This potentially captures some of every one of those games out there.

A new shooter game for example - like when Rainbow Six Siege came out - only competes with the FPS shooters directly, and then also only competes with the structured 5v5 style FPS games (not Rust's secondary gameplay, for example). The fact Starbase is knocking on everyone's door is a big deal - and if the networking can keep together a huge gaming universe... what... you're going to go a) play a meaningless match of PUBG or b) go raid a faction-owned station in Starbase and enjoy the same kind of gameplay where you have to be the last group alive on the station to capture it. I see Starbase securing a lot of the gameplay from other games, if they can make sure all the gameplay in Starbase remains meaningful, which is the main unknown at this point.

Vexus said:
Yeah the core gameplay is team deathmatch, and capture and hold or escort can be simulated with Starbase assets and YOLOL code.
Click to expand...
Overwatch isn’t all about an objective. Sure, that’s what you fight over to win, however the game is more so about the mechanics of the characters, how they interact, synergize, and counter. You take out the characters, you have the core win mechanic of many other games. You take the characters out of the game, you don’t have Overwatch.

I completely agree. The point is Starbase is a competitor and has the potential to pull players from that game simply because it is a shooter game. Like I said, the flavor of shooter game might change, but they're relatively the same. Whether you synergize or not, if you can just kill the entire enemy team, you win. The method to do that changes, but the core gameplay does not. Regardless, the quick matches and 'ultimate' abilities is why I didn't "green check mark" it. But with YOLOL similar gameplay can be simulated. I'm not saying anyone might do it, but then again, it's possible. Also just to be clear I'm not saying "we can remake the entire game in Starbase" I'm saying Starbase competes with these games.
You must log in or register to reply here.
Share: Facebook Twitter Reddit Pinterest Tumblr WhatsApp Email Link
Top