Hello everyone, here are the progress notes of the week 42 of 2021!

This week's progress notes focus on all the major the features, additions and improvements currently in the works. The features have been roughly divided into categories and in the beginning, we list both new and recently completed items from the past two weeks. In addition, the categories for both Capital Ships and moon bases and mining also include items that have been completed in the past to give an overview of each feature as a whole. We hope that you enjoy these snippets of the Starbase development!

Please note that the "Progress Notes" are different from the Starbase "Patch Notes". Progress Notes are snippets from the development team and what has been worked on during the previous week, and many of the features might not be present in the current or upcoming builds of the Starbase Early Access. Some features, especially in the design portion, can be subject to change as the development continues.

Below we have listed the different states, and an explanation of what that state means in terms of development process.

Design: first phase of development
Art: done after designing of the feature, but can be done either before, after or at same time with programming.
Programming: programmer implements the feature based on design
Configuration: feature is technically done but a designer needs to configure it
QA: feature is technically done but needs testing. May happen before or after configuration.
Click to expand...
The weeks marked in the "Time in development" column show only the active development weeks during which the feature has been worked on and include all phases of development. The time is rounded up to weeks, so in other words, if one day has been spent on a feature during the week, it still counts. Therefore, please treat the week counter as a rough estimate only.

Completed in the past two weeks 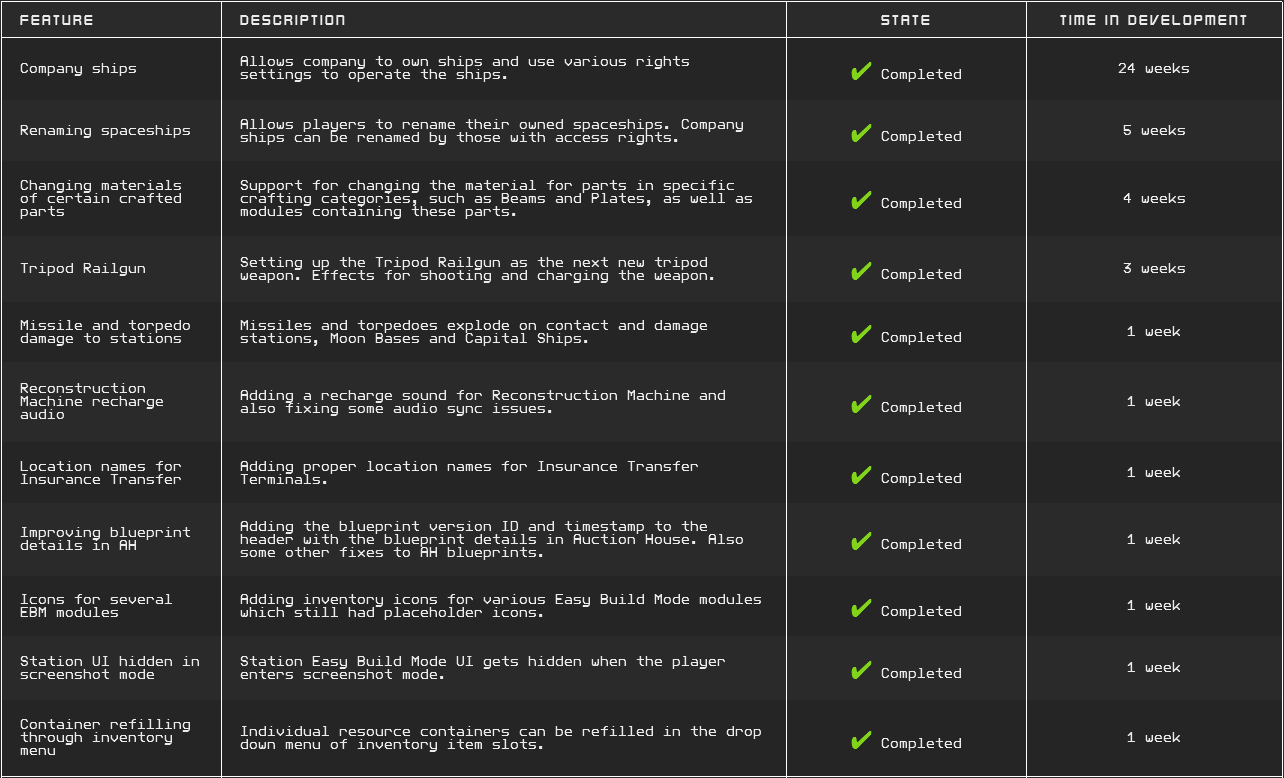 Completed in the past two weeks - Capital Ships 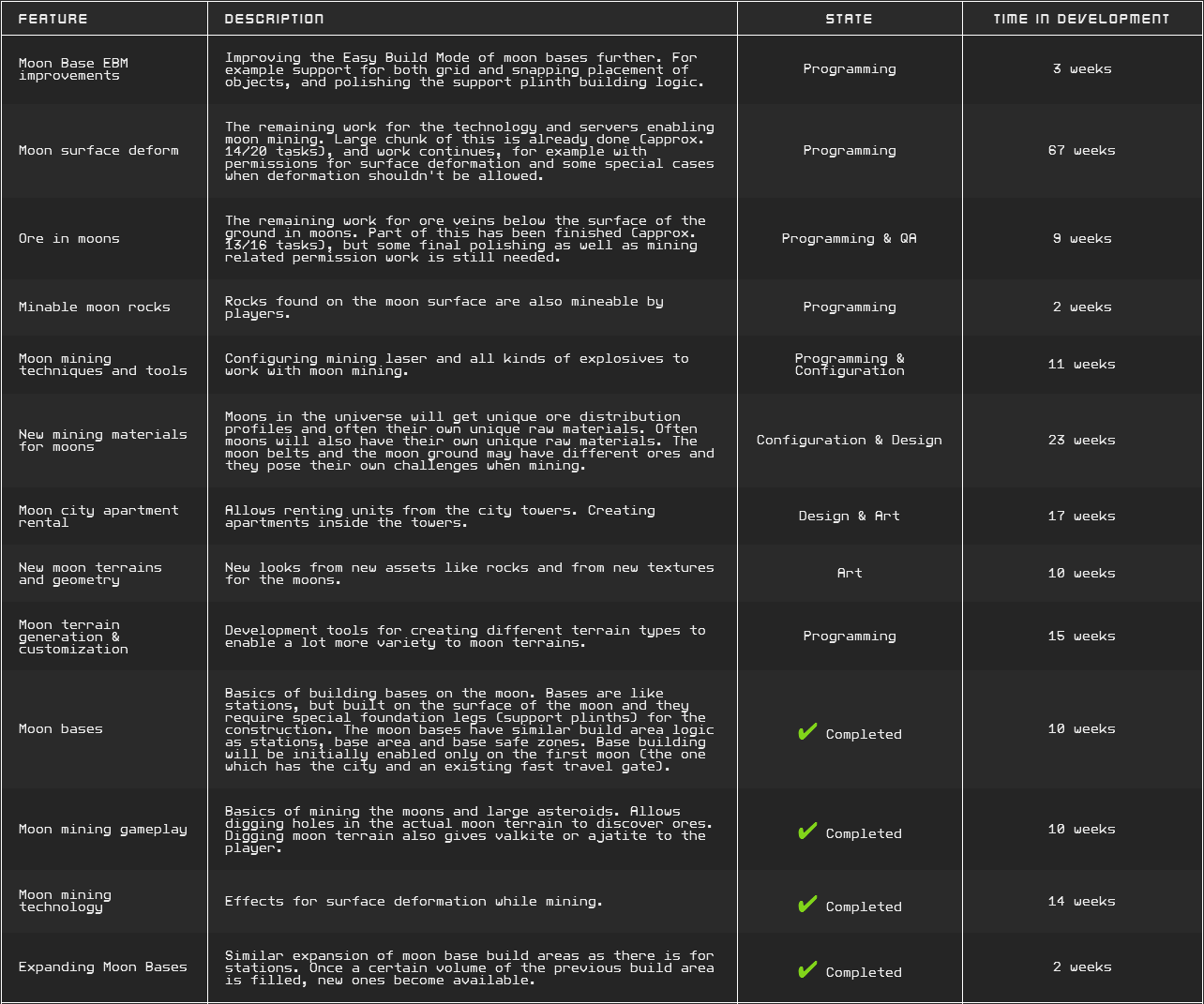 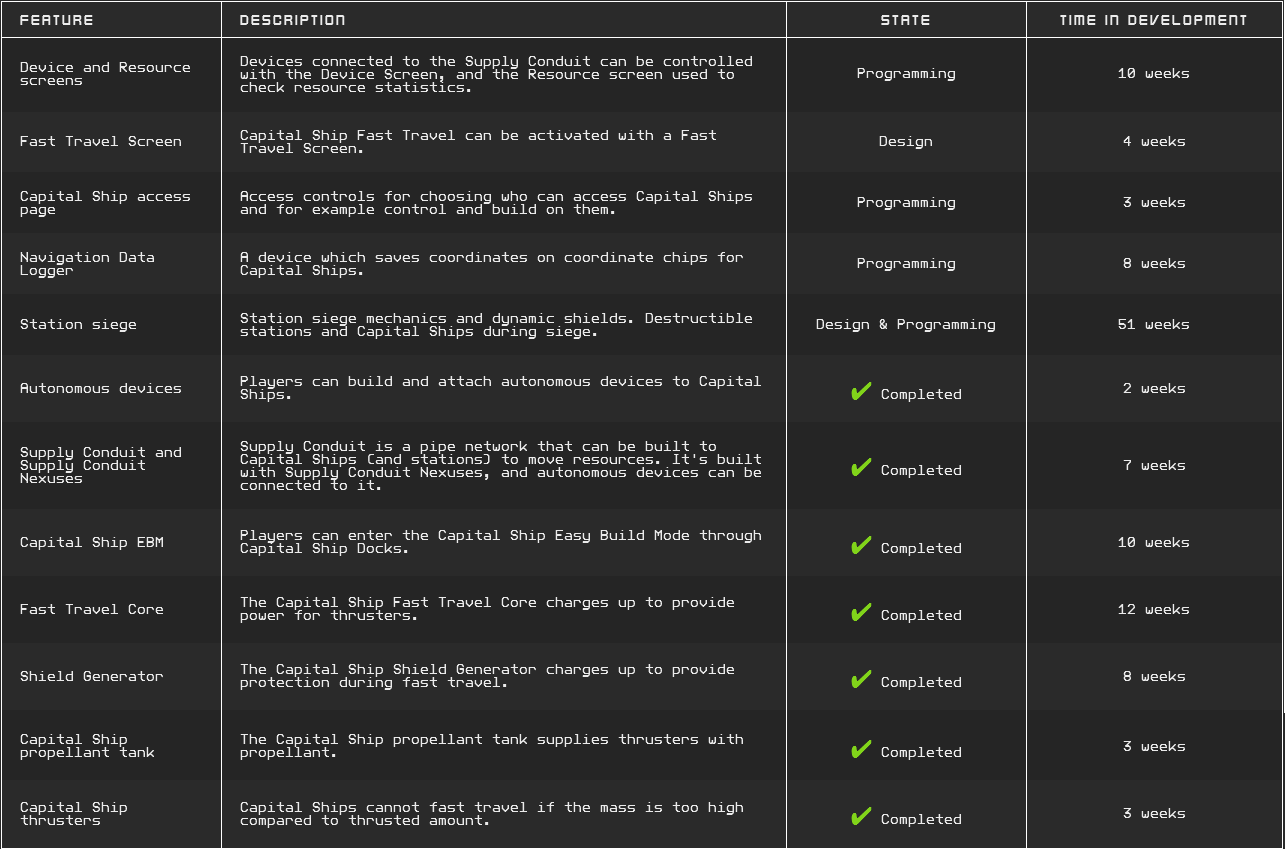 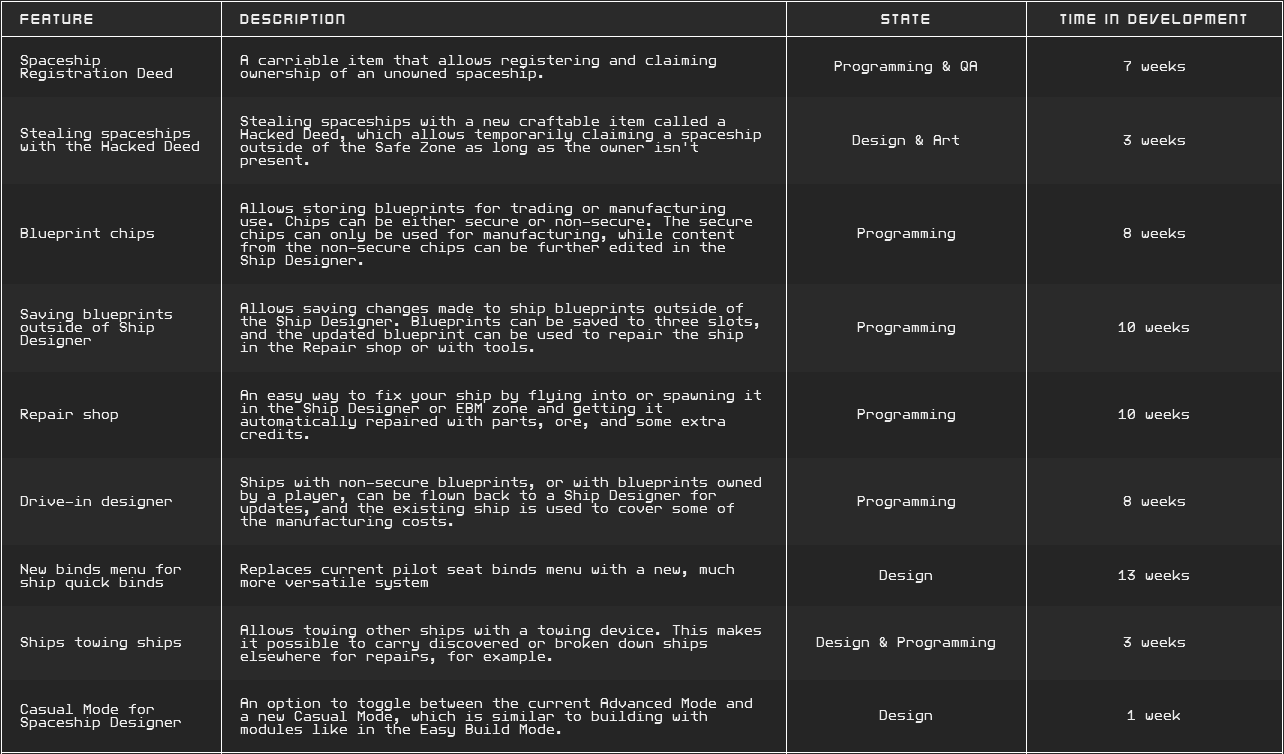 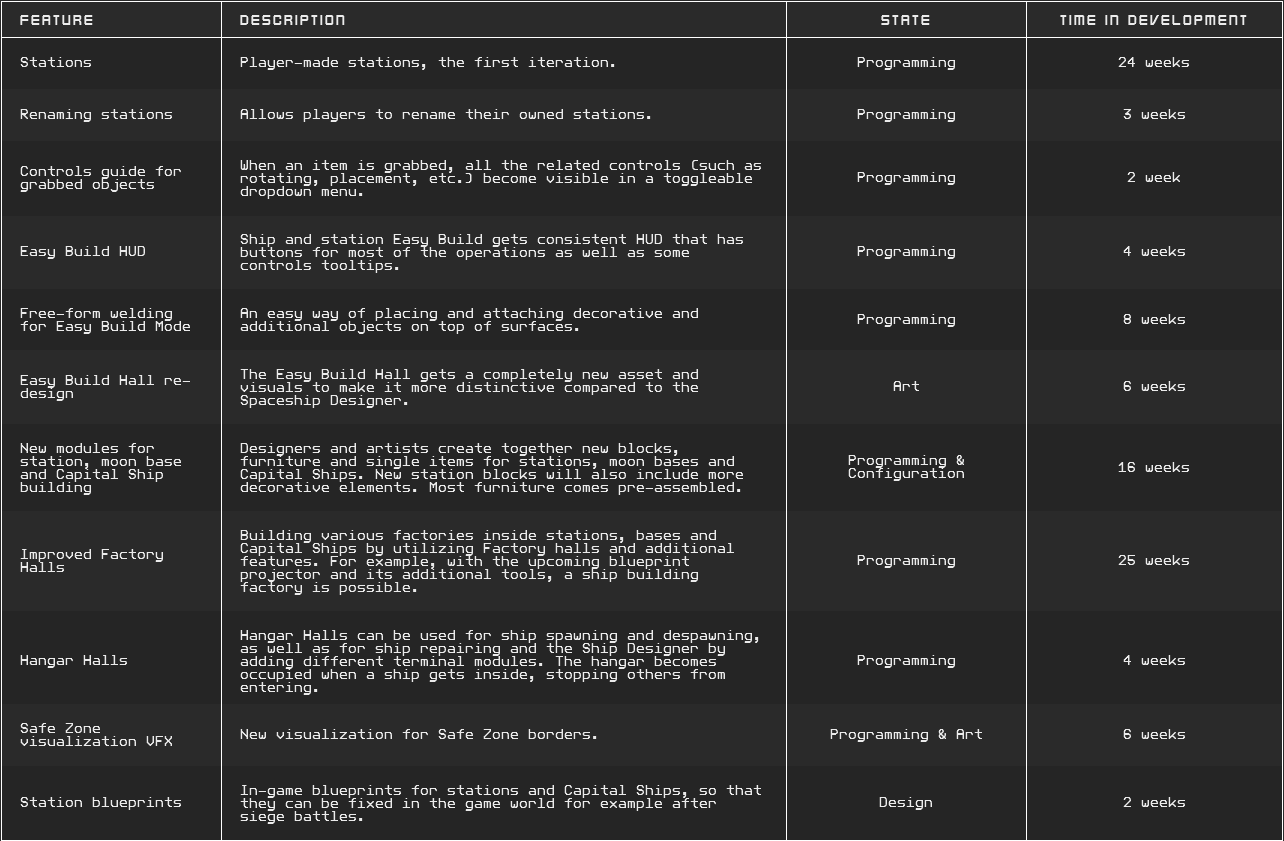 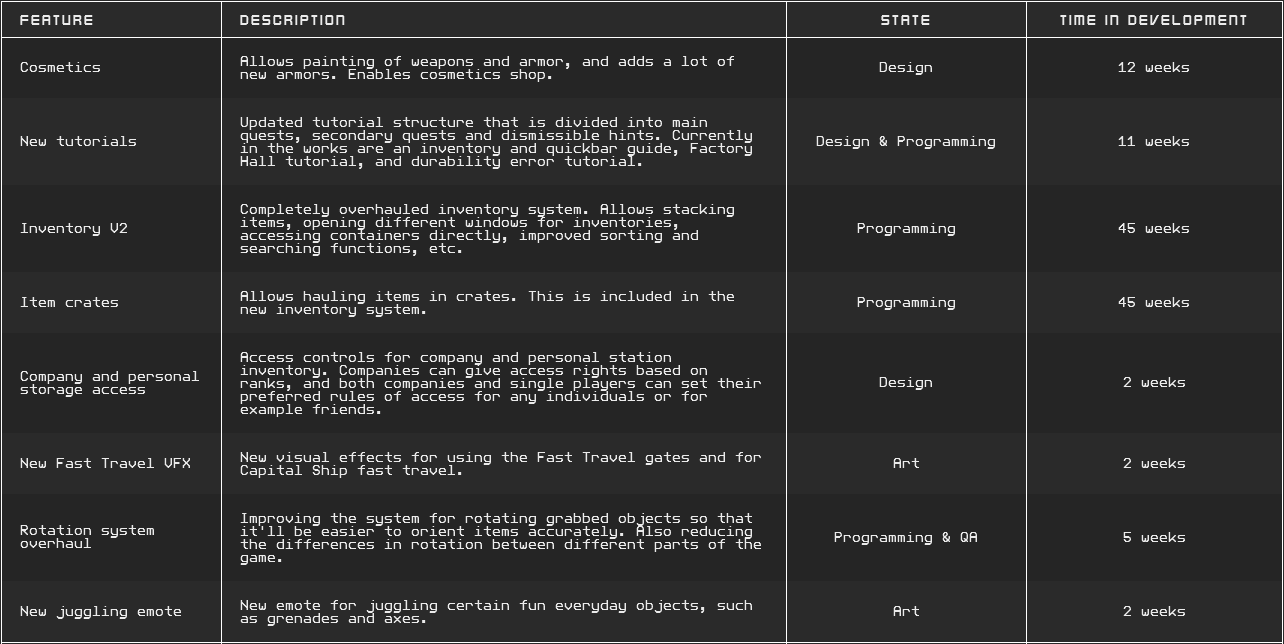 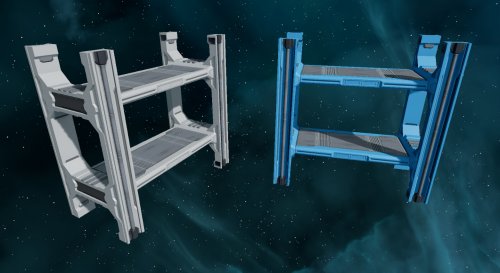 But otherwise? This is pretty cool.

Would be cool to get a tasks out of expected tasks for inventory 2.0 because it feels like a lot of quality of life is gated behind it being completed. (post 4 of asking for full (or just more) precision on the designer translation tool and rotation tool text boxes)

Moon base! Is the installation restriction different from the station?

Ah renaming ships will be SO useful!

Thanks you for this detailed notes, you are doing an awesome job!

Thanks for the update and the work you're doing.

Ship renaming will be great - could we add station renaming into that?

Daddystu said:
Thanks for the update and the work you're doing.

Looks like Moonbases are well on their way to being pushed to the live server soon.

"Armor balance: Enhancing some attributes of armor materials in relation to balancing out combat."
No, you need to completely overhaul how armor works. The largest piece of armor must take the same amount of shots to be penetrated as the smallest piece. There is no option to do otherwise at all. Mandatory.

Mandatory!
I'm sorry, I got triggered, this really really has to change!
Last edited by a moderator: Oct 26, 2021

Kenetor said:
Hell yeah, ship AND station names!
Click to expand...
Wooot! Haha Kenator on the ball on this one !

Also, by the way, holyyyy sh* things are moving along! Itching to get on the PTU and try some of these out! FB killing it

And I reckon the deed models/art look great, seem to be very intuitive ... blue is ownership I think? Red is hacking ,green is sale, aqua color is repair, yellow is test? Anyway looks nice!

Aha said:
"Armor balance: Enhancing some attributes of armor materials in relation to balancing out combat."
No, you need to completely overhaul how armor works. The largest piece of armor must take the same amount of shots to be penetrated as the smallest piece. There is no option to do otherwise at all. Mandatory.

Mandatory!
I'm sorry, I got triggered, this really really has to change!
Click to expand...
Indeed!!!! this MUST be fixed ASAP! there is no logic in how the armor works... you devs are emphasizing the players to build "thrusterboxes" and "BoxFighters" this is very sad...

@Aha @Fizz fun fact guys, this is exactly how the game launched in CA, and all we say was the massive spam of the smallest plates instead of the largest, this was hugely bad for performance and made even the smallest fighters impossible to kill due to how highly they could be armoured and its massively penalised larger ships because you both couldn't use larger plates as well as not having enough object count to spam small ones.