A proposal to change how movement works (less acceleration)

After a hundred hours in Starbase and participation in two tournaments and several unofficial matches I believe I have found what makes combat so difficult and un-enjoyable. The issue is Acceleration, it's much too fast, all ships easily go from 0 to their max speed in barely one second. This includes ships that can go at 150m/s. I think most CA testers would agree that combat is far too latency and luck based (also somewhat do to keyboard aim instead of mouse). But the main reason for this is that ships can turn on a dime and instantaneously change direction making target tracking and prediction nearly impossible. The solution? Lower space drag and thruster acceleration. This will make ships drift more and give the controls much more of a space feel while still being nice to the game engine. Here is a rough graph to show the issue and my solution:
red is old acceleration and blue is my proposal (right axis is m/s, bottom axis is time in seconds) 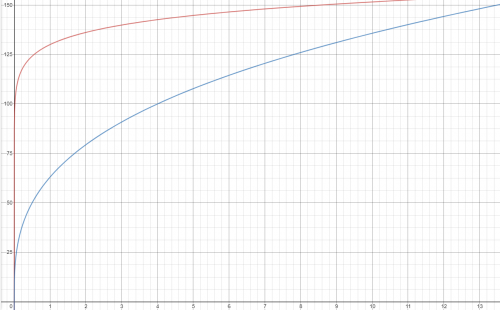 Another thing to point out is that it seems fairly unrealistic that any steel structure is able to undergo 100m/s of acceleration (10g!) without getting crushed like a tin can. There is a reason other then astronaut safety rockets don't accelerate that fast.
( if this would better belong in a CA thread then I'd be happy to move it I just can't seem to post there)

This would also make aqility of a ship in PVP/dogfight cituations more important for evasion and it would make the piloting more of a skill based experience rather than something that depends on ones ping to the server. I would like this change that you have proposed because it makes perfect sence that there would be at least some latency for accelaration even on smaller ships.

Maybe if possible later the devs could add a variant of this change that depends on the voxel volume of a ship. Since the larger a ship is it's harder to make it move, turn and to stop (conservation of momentum is a thing). This should also fix the insane 10g accelaration of the ships, but since we are endos that have no organic parts that would be squished but we could still be affected because if your ship crumples like a pancake with you in it, that is what we in the industry call a bad day for anyone involved.

So hopefully you gyes impliment something similar to this or maybe even the variant I suggested soon.

I think I'd like to see mouse/joystick controls before making ships significantly less responsive and floaty.

If anyone is interested in more data about speed and acceleration, elec0 did same research.
I totally agree that acceleration should go down.

Personally I'd connect it with Tgess suggestion of requiring less thrusters for the same top speed:
Leave thruster force as it is.
Halve the drag force.
Double fuel and propellant consumption.
Reduce generator output, so the increased mass of generators makes up for reduced mass of thrusters. Each thruster should require generator of equal mass to that thruster itself.
All those changes would keep current top speed the same, while reducing acceleration by half.

Big ships are different issue. I don't know if and how current drag equation calculates for big ships.
I'd make drag affect ships inversely proportional to cube root of their mass.
So ship 2x bigger in all dimensions (8x the mass) is 2x less affected by drag, so needs 2x less thrust:mass ratio for the same top speed. But it would't affect it's acceleration, and breaking using drag would be much slower.

Making big ships effectively more thrust efficient would help them carry their basic role: heavy durable fire platforms (easier to armour fewer thrusters), long range transportation (i.e. carriers). At the same time it would make them less agile (less drag to slow down) would move them out of agile fighters role.
And they would just feel heavier.

Perhaps instead of reducing the acceleration possibility, add inertia to ships. So, if a player wants to be able to turn on a dime, their ship will have to have a strong frame and light materials otherwise it'll tear itself to pieces if it changes direction too quickly. The damage doesn't have to be immediate, it could be a slow stress, a reduction in armor value so that players could pull out all the stops for a short while but prolonged abuse will be costly.

Essentially, if you want to protect your ship, the max thrust on levers would have to be toned down or the lever acceleration reduced. I could also imagine a button that would then take off all the limitations for an awesome last ditch effort.

This could then warrant a new sensor, and accelerometer so pilots can be warned if they're pushing their ships too hard.

Additionally, this would help to make the distinction between large and small ships more useful. Small fighters that want to be agile will be forced to use light armor, thus making them easier to destroy if hit. The big ships could then use their large frames and slow acceleration to pack on durable armor that maneuverable ships could not.

XenoCow said:
Perhaps instead of reducing the acceleration possibility, add inertia to ships. So, if a player wants to be able to turn on a dime, their ship will have to have a strong frame and light materials otherwise it'll tear itself to pieces if it changes direction too quickly. The damage doesn't have to be immediate, it could be a slow stress, a reduction in armor value so that players could pull out all the stops for a short while but prolonged abuse will be costly.
Click to expand...
Yes this would be a much better way to implement it I don't think messing with drag based on volume would be very interesting and could probably lead to exploits but actually calculating rotational stress would be cool