We promised more open communication about big gameplay changes following the discussions regarding attachment plates last week, so here we are!
We'd love to hear what you think of the following design for manual beam welding, a new tool which would act as a replacement for attachment plates when trying to connect beams together, especially at odd angles and for overcoming small gaps. 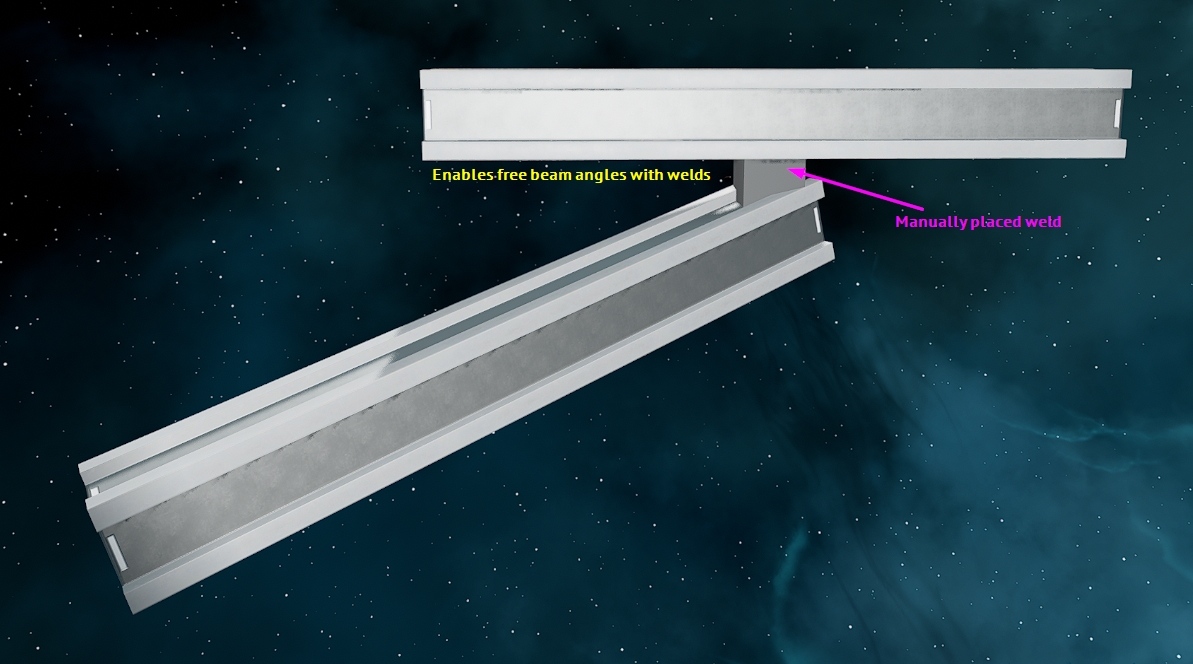 Manual beam welding would enable free beam angles, by creating a weld block that would adhere to the same physics rules as other welds (and not literal magic like attachment plates). With the help of manual welds, you would be able to place beams at any angles, and also fill any reasonable sized (Something like ~12cm max or smaller) gaps with the manual weld block. The gaps could be any length, as long as the weld block would intersect with two or more beams. 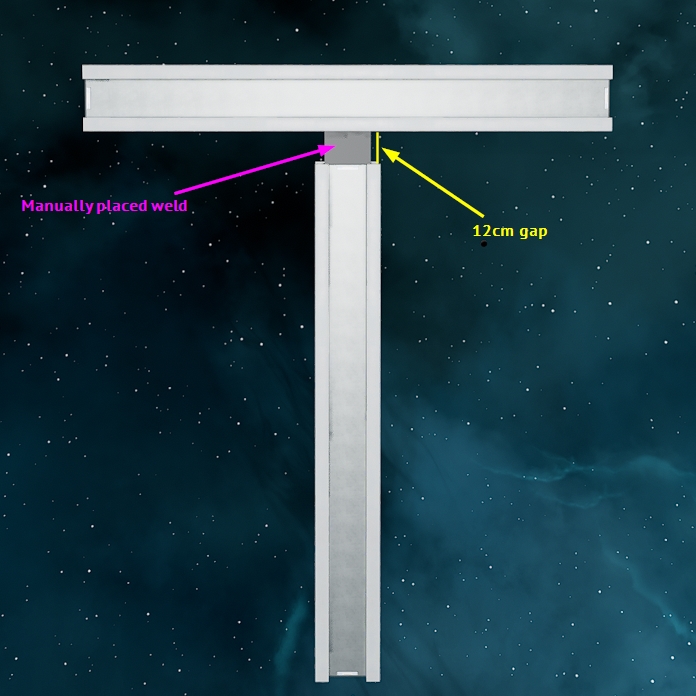 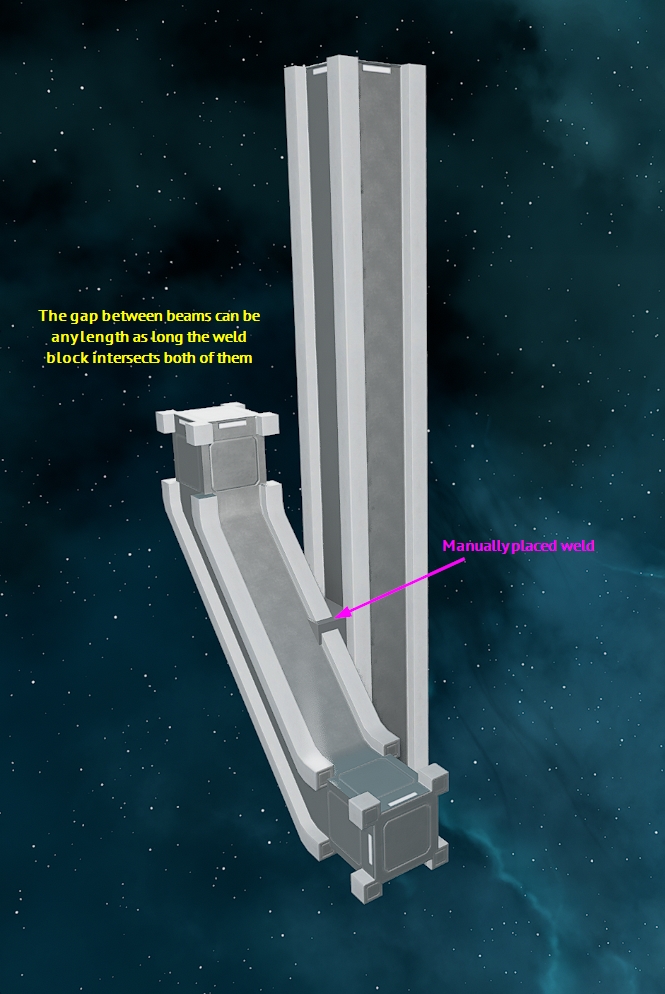 Using these welds as opposed to attachment plates would lead to fewer objects, better performance and most likely bigger ships (They wouldn't be using up that precious bolt limit), while allowing similar design freedom.

We're also aware that many of you have used attachment plates for plate bolting as well, and we'll share more of our thoughts on those as well shortly. 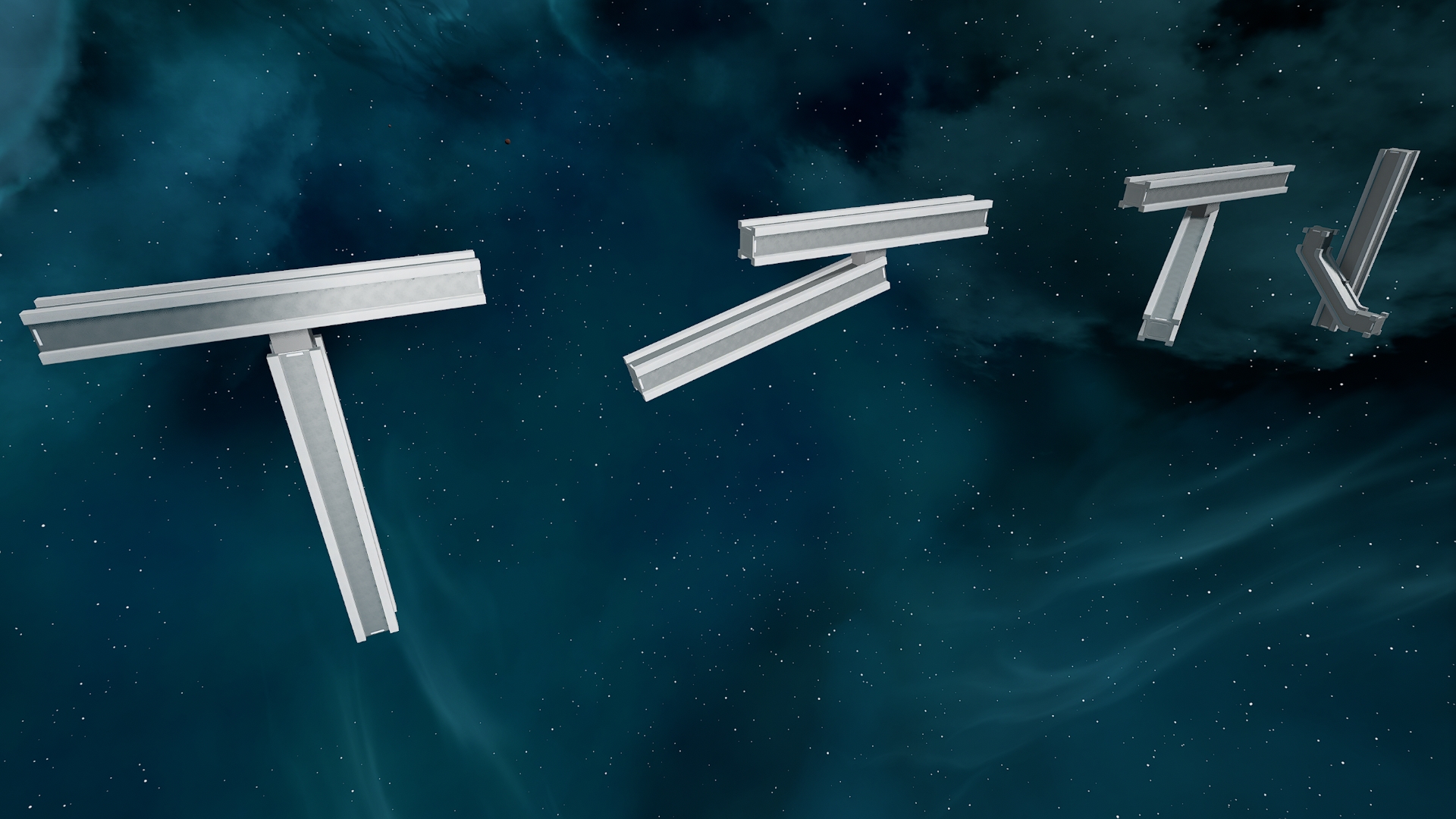 If you think of any feedback, concerns or questions about these manual beam weld blocks, let us know in the comments below! Thanks

I guess the best exchange for attachment plates

That's a amazing solution. I wasn't sure if you would be open to the idea of manually placed welds. But this would make building frames much more comfortable. Better than attachment plates even.

This is honestly far better than AP's

That is very neat solution
Is this "manual weld" movable like object?

And, can we "stack" welds to bridge gaps wider then 12cm?

I mean this is basically the perfect solution

I think this is a great solution for any builder who makes heavy use of attachment plates like me, and it'll 100% help with increasing the accessibility of our heretical building. I could not ask for a better replacement for attachment plates.

This is pretty much the best solution to this. It is essentially what AP's are used for, and might even allow for even more then AP's do right now.
's

there shouldn't be anyone complaining about those
- beams are connected
- stress is being transferred
- odd angles are possible
- gaps are bridged
- did I forget something?

and in regards to plate bolting, well, there are workarounds, like using small floor mats and other things so there isn't really any need for a asap addon in that regard

A cool idea for plates would be to have plate versions with groves like the decorative railing. So we can add bolt in between plates.

Or if possible some kind of plate to plate welding in a similar ways to how it is proposed here for beams ?
If so it could help hide the seams if the player can resize them. Being able to paint the plate weld in this case the same coulour as plates would come in handy.
Last edited: Jun 8, 2021

We'd love to hear what you think of the following design for manual beam welding, a new tool which would act as a replacement for attachment plates when trying to connect beams together, especially at odd angles and for overcoming small gaps.
Click to expand...
Love it! This would solve all the (attachment plate solved) problems I have with my current ship designs and would also make it much easier to generate interesting ship shapes in future!

Here, take my attachment plates, give me this instead!

Seems to me this surpasses what Attachment plates ever did, mainly this now creates a 12CM buffer for inaccurate builds.

I would ask for a measuring block as well, basically a beam with 2CM snapping points all around it, up to 12CM, so we can ensure we're building a balanced ship / in symmetry, IE, place the measuring block on the beam, snap the beam we want to weld at 4CM on both sides, fill with weld.


The alternative is trying to free float them and hope the weld works out.
Or you could use existing beams but you're limited to the minimum size of snapping points on existing beams.

That sounds like a perfect solution! Although if you are trying to fill a small gap with the weld block will the weld extend out of the beams and inhibit you from placing plates there?

very nice, thanks a lot!

I think this is an excelent solution to the problem, thanks for taking our feedback into account!

My only thought is 12cm might be too small, especially for wierd angles where your buffer will get eaten into and its hard to tell. So I think somewhere between 13 and 23cm buffer would be best, although this might be something you can anly tell for sure through testing in the editor.

It definitely stops my depression hunger which i got since APs announcement. I will give you a yes ^^

I think it’s a Great solution for beam connection but for plating and decorations I always liked to use APs as small but super durable solution to connect and stabilise. I think it would also make sense to have plate welding for those purposes cause they are the same materials as beams so that is a logical solution, it would also make a lot easier and if it ever becomes possible to weld plates to beams (as long as they’re the same material) that would solve so much.
Anyways I kinda trailed off topic; the manual welds are a good solution at least for now
You must log in or register to reply here.
Share: Facebook Twitter Reddit Pinterest Tumblr WhatsApp Email Link
Top