Looks good, though... my main fear about losing APs is making two plates floating in air stick together (like fins, for instance), if that makes any sense...

ThatRandomTayto said:
Looks good, though... my main fear about losing APs is making two plates floating in air stick together (like fins, for instance), if that makes any sense...
Click to expand...
There are a few very thin plates in the game, they aren't particularly strong but they should get the job done if you just want thin components on ships and a bit more detail.

My understanding is this just removes the bolts from frames, functionally reducing poly's and number of items per ship to keep track of correct? Seems like the best way to get rid of attachment plates to me, though I did like their artistic style.

I have a love/hate relationship with bolts. I like the freedom that you can take whatever and bolt it to the ship. That if you find something useful in space to salvage you can even transport it by, well bolting it to your ship. (edit.. but don't remove bolts!!!!!)
Click to expand...
I love the Heath Robinson look I've seen of some of the contraptions held together by bolts. Welds won't be the same... But for a "proper" frame, they seem a perfect solution.

I have three issues with the presented welding design.
Instead of welds I'd suggest introducing dynamic beam parts. To start I'd suggest keeping them constrained to 2D. This actually fulfills a ton of common scenarios in ships that were using attachment plates. (I'm not suggesting new voxelized parts, but more naive fake ones that can be instance rendered quickly). 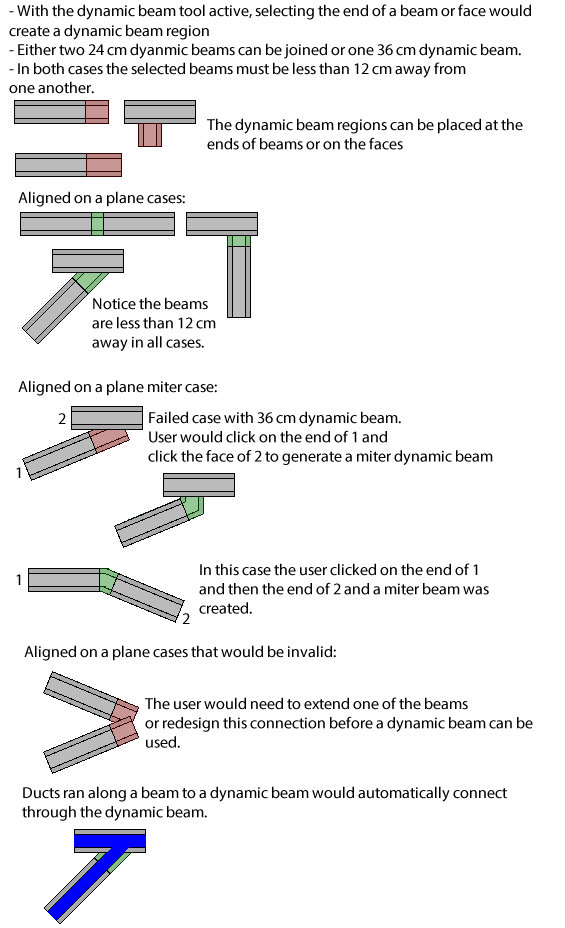 As seen in that image the dynamic beams work on any faces that share a plane. So in KaiFB's last image with the 4 examples the 3rd beam configuration would not be possible as the beams don't share at least one plane. That beam configuration is precisely the kind I'm referring to that cause awkward plating situations. In those cases I would argue what we need are new beams. For example, the beam shown below is extruded 192 cm then shifted 72 cm down and 72 cm to the right. This creates a beam that can work with other beams in a grid layout. 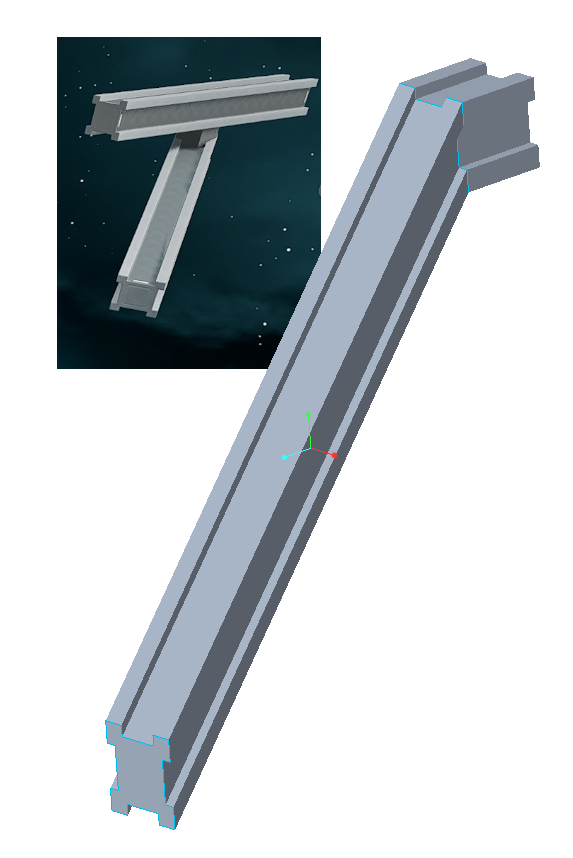 There's a lot of beam combinations if you go that route (343 beams), but there's also semi-intuitive plating parts for such slanted beams.

Using fake dynamic beams in theory would look really clean inside of ships with exposed beams. You'd see a continuous solid beam structure with no gaps.

I will say if welding blocks are the direction used, ensure they must connect two beams and maybe limit how many can be placed in an area. I could definitely see people just spamming these as filler pieces in their plating if there isn't a limit. (Kind of like how some designers use tons of bolts to cover up areas).
Last edited: Jun 15, 2021

This solution is a lot better than using attachment plates. Being able to move weld blocks into beams is a big plus and will help with integrating ducts into curvy designs.

My only gripe is some designs, where you're working with angles in 2 axes or where you can't use the longest beams means your structural stability is reduced. AP's and bolts appear to be the only option for increasing this to a safe level. I've got a desgn to complete and trail which might make sense of this.

Overall though, great step forward. If we can get something similar for plates, I think we're close to getting golden.

Kinda thought we would have that gap filler by now.

So did I, but given the choice between fixing serious problems (such as ships moving on their own out in the belt, or prop/fuel vanishing leaving ships dead in the water) or adding beam welds, I'm not too upset that they chose a different priority.

You mean the priority of... capital ships...?

MattheoAR said:
same
Click to expand...
They really made shipbuilding unique (for me), now it's nearly impossible to make stuff like a Spitfire, though that'll be fixed when we get manual welds

Where is that replacement beam piece they talked about?

Cavilier210 said:
Where is that replacement beam piece they talked about?
Click to expand...

I hope we get a ETA on this SOON!

I wonder if this is still worked on or it has been shelved.

so is this never happening?