Some initial ideas for my ship.

It's quite hard to design ship when all the knowledge about the game is based on screens and videos. But whenever I have an idea, I need to draw it. Otherwise it just circle through my mind.
So here's couple of design concepts, with some quick mock-up model done in Dream Car Builder. 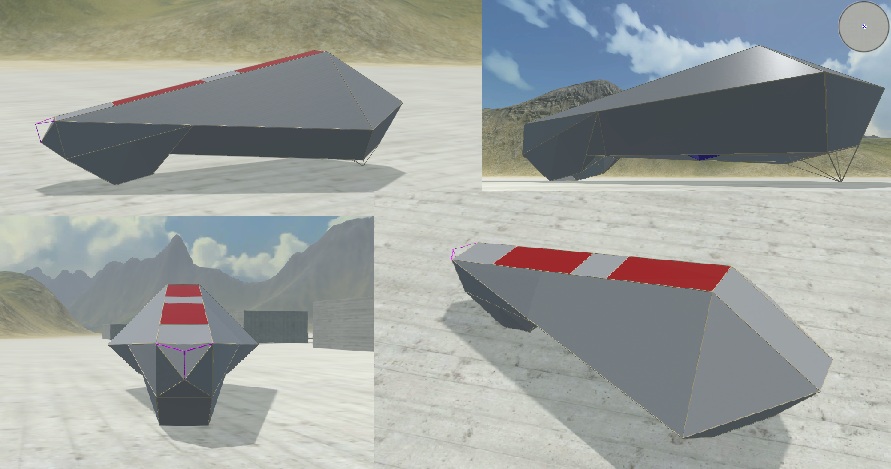 I have plenty of other ideas, this ship is just a start.

I know. But I hope they'll change their minds.
Especially if they decide to add recoil for ship based weapons (which would be extremely cool). Then buffing turntale/rail structural integrity will be a must. 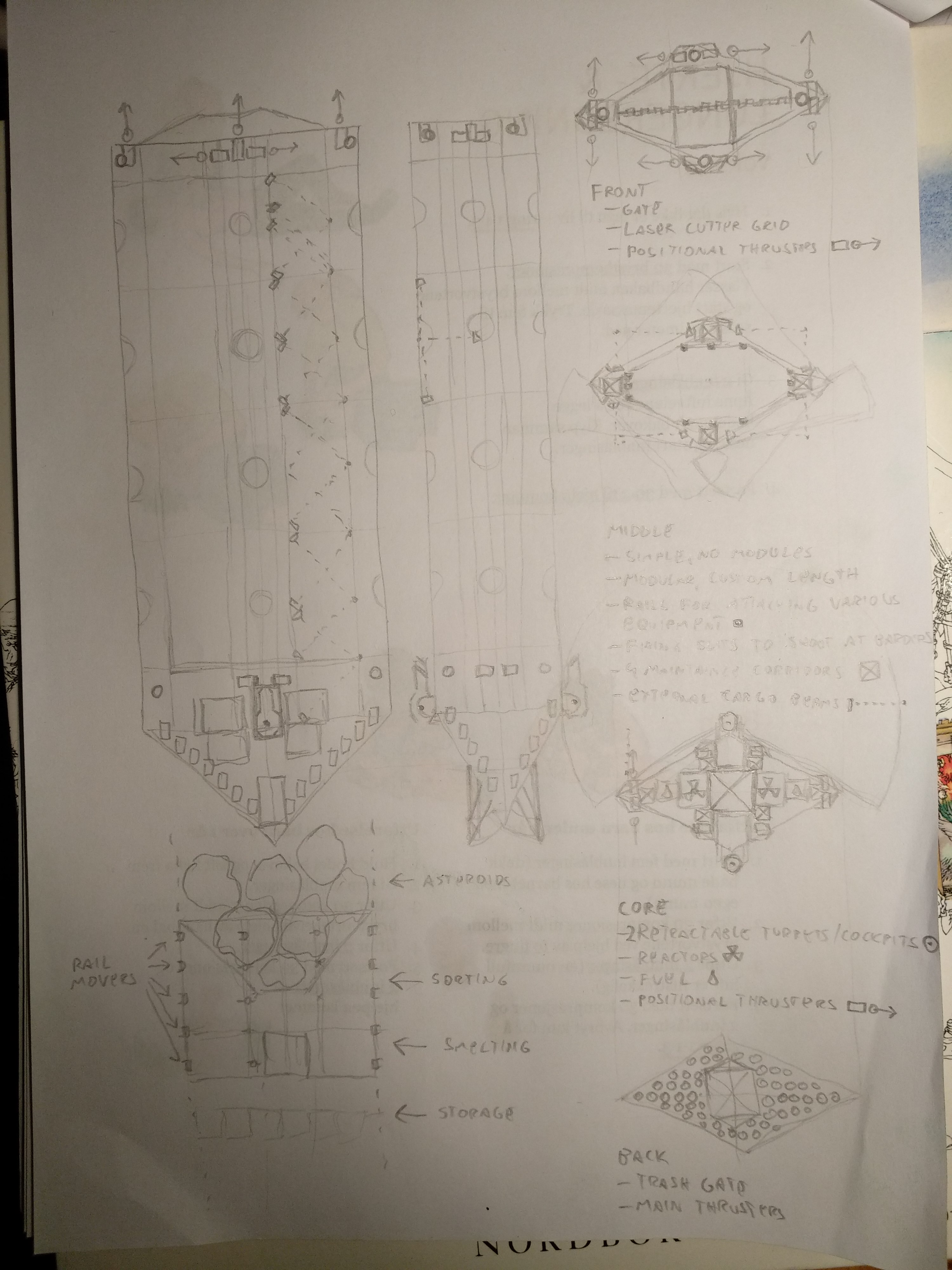 Looks pretty neat and useful in multiple ways, it is clear to see you've spent a lot of time planning this. I honestly can't wait to see your players' ship designs in-game! I would definitely buy a ship named 'Space whale'

VenlaFB said:
Looks pretty neat and useful in multiple ways, it is clear to see you've spent a lot of time planning this. I honestly can't wait to see your players' ship designs in-game! I would definitely buy a ship named 'Space whale'
Click to expand...
If you're ever looking for volunteer ship designer or tester, you know where to ask

We should compair Ideas sometime lol, you have a lot of the same thoughts I have had about How I want to make my flag ship lol.

I belive they Said u cant put turrets on Pistons and stuff like that, i could be completely wrong and have misunderstood it, But i THINK so, correct me If Im wrong

Quote from wiki:
"Rails can be used to create anything that moves on rails, like elevators, gun turrets, and factory lines."
I hope it's still valid.

Another boat idea. This time much more in detail and following in-game modules sizes. 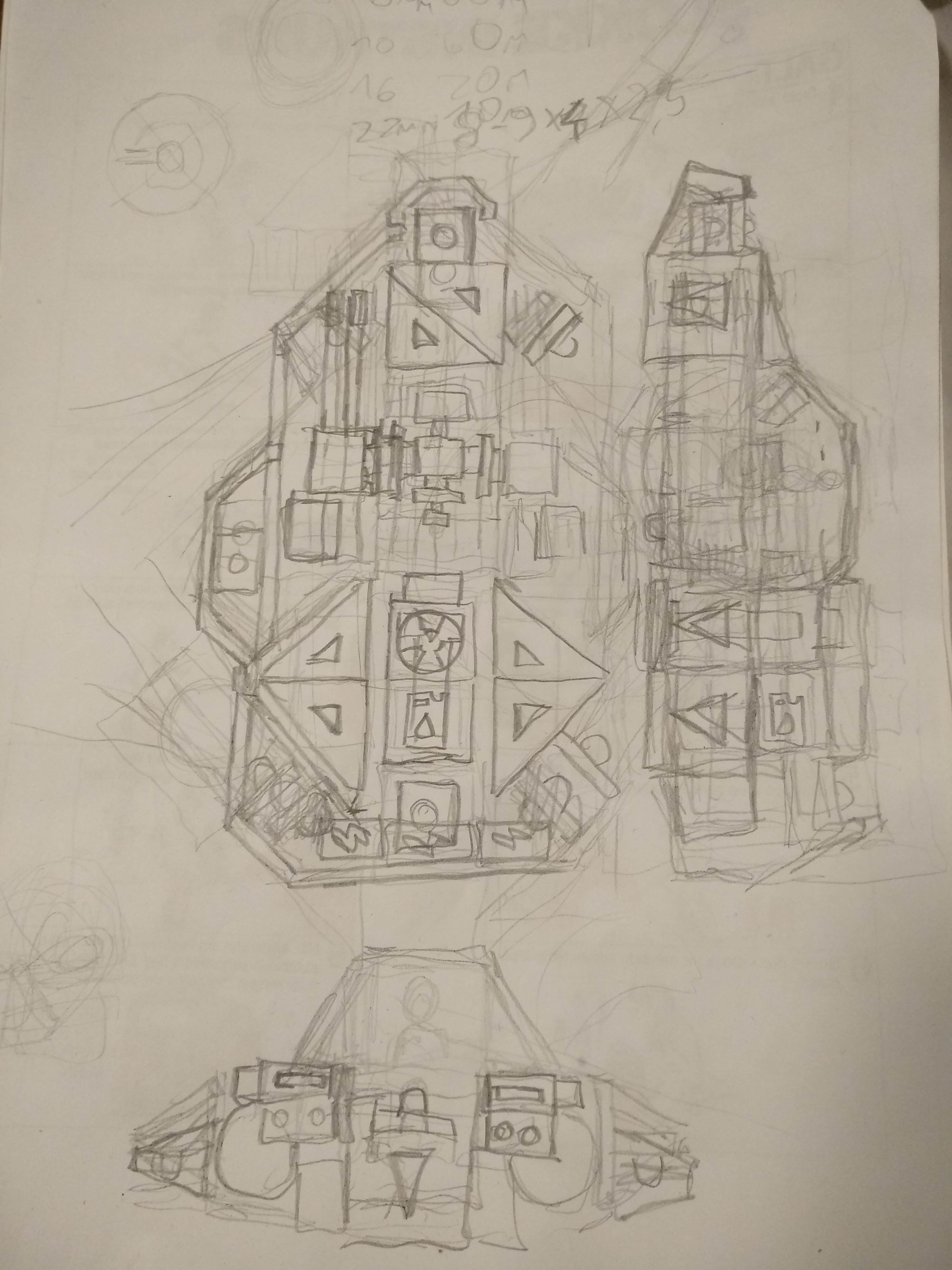 Time for carrier/cargo freighter. Expansion of my previous space whale.

Main inspiration was Canterbury from expanse for the long main hangar.

But this time I opened it in the back, to allow easy dropping of cargo or rapid deployment of fighters. Thus I had to add space for all the internals and thrusters: sides got added.

Wedge shape allows top and bottom turret to cover with fire 90% of external surface (all except gates) which will help immensely against any boarding attempt. Just under them there will be firing windows for infantry with similar coverage.

So the shape if SW imperial destroyer was natural evolution, rather than direct inspiration.

All turrets retractable.
4 CIWS turrets at corners cover ~75% of sphere each.
Additional 4-6 turrets along top and bottom ridge. Dedicated for heavier guns against bigger targets. Plasma or rails.

Side turrets on the sides probably wouldn't really fit. I'd rather keep that edge heavily armoured, as it'll be exposed to enemy lines.

Whole ship is built of 5 diffrent "grids".
Middle one (all the internals and ridges)
4 angled ones for surfaces.
Angled at 1/2 (~30 degree) angle using armour block as spacer. 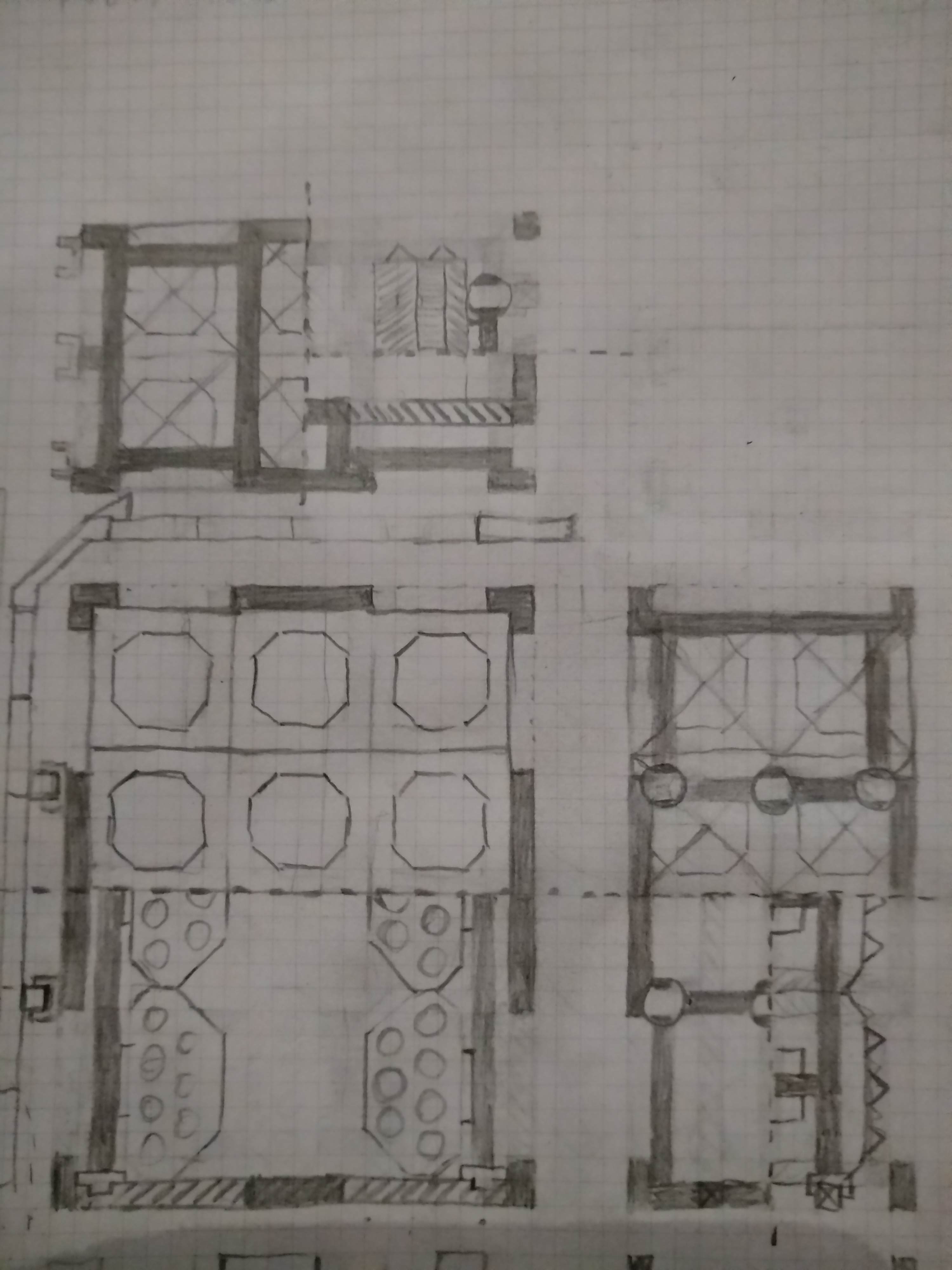 Another version of my fighter: Selkie.

After some detailed drawing, diagonal rcs take too much internal space, so I switched to external ones, flushed with armour.

I also moved guns pivot to the middle. That way it'll be easier to balance with different loadout, and to protect ammo.

There may also be enough space for two retractable rocket racks. If rails can survive acceleration from 12 triangles on spatha-sized craft.

Picture with railgun on one side, but obviously you either take 2x rail or 2x AC + 2x LC

In case of AC+LC loadout, both will be under the same trigger, but AC with slight delay. To prevent wasting AC ammo on low-chance sprays or ranging.

6 cargo beams on top allows it to haul some cargo or roids. Need to somehow pay the fuel for all those thrusters. 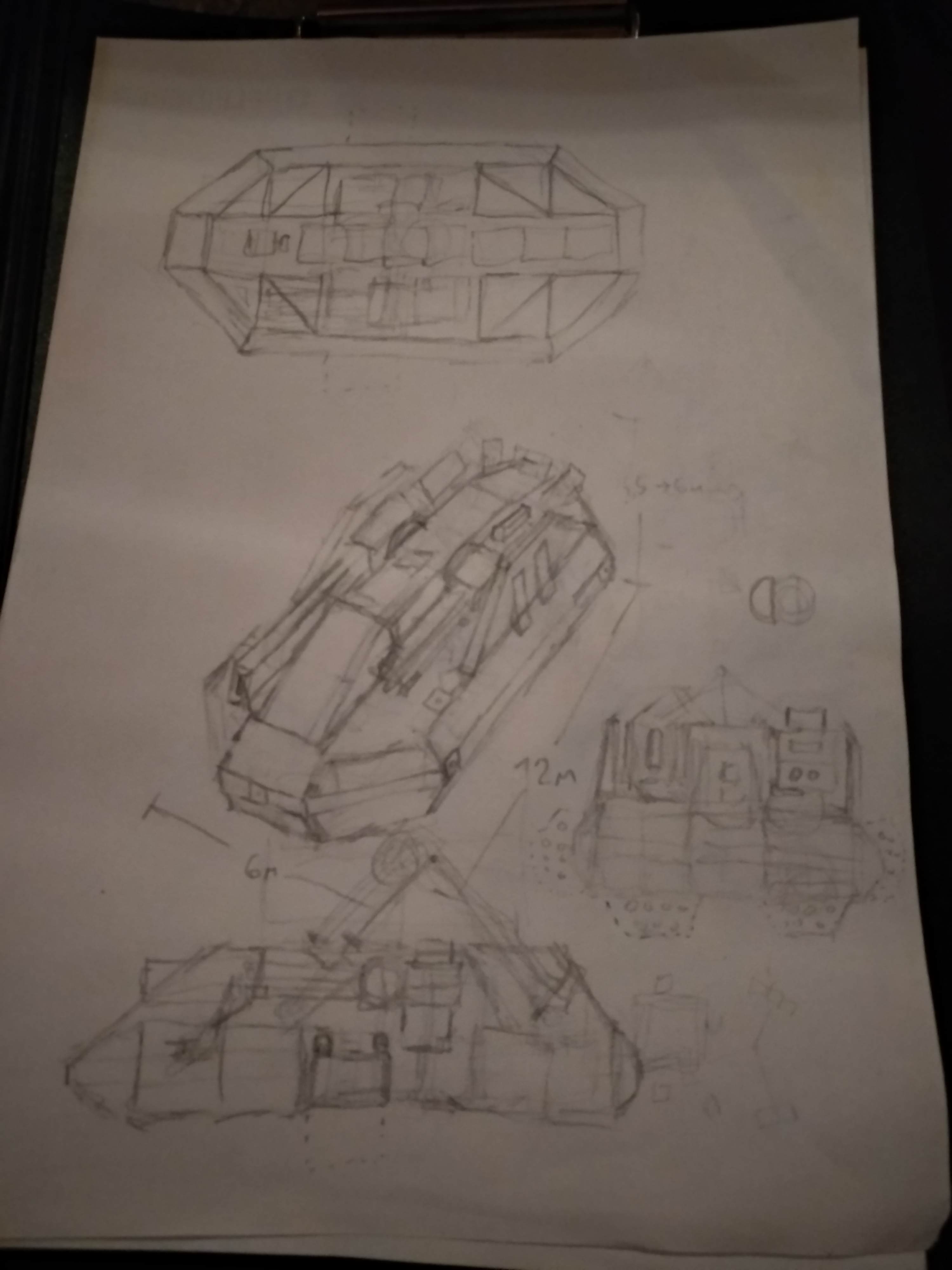 Great designs! If you have spare time, I suggest using Okim’s parts to make a more in-depth design.

Thanks!
Not much time recently. And when I'll finally have it, the game may be already out.

I got my hands on blender. As warm-up and controls learning project I took standard containers. The same ones I drew earlier, but this time using actual parts.

Different versions:
1. Thruster pack. Since all my cargo ships are designed with rear gate, you can replace the last container with some speed.
2. Empty frame. For future use.
3. Missile rack. Front gate allows turning cargo ship into devastating heavy artillery. This version is non-stackable (you can have only front layer), but there is one planned.
4. Standard cargo box
5. Cargo lock frame. While frame volume is only 3m deep, with a little bit of work can be stacked to hold much longer objects.
6. Modular cargo box.
7. Fuel tanks.

Size is by no means random. Making it 6.5x5x3m allows fitting it into various different crafts. 6.5x5 is also decent cross section for small fighter, so all my cargo ships can be used as carriers if needed. 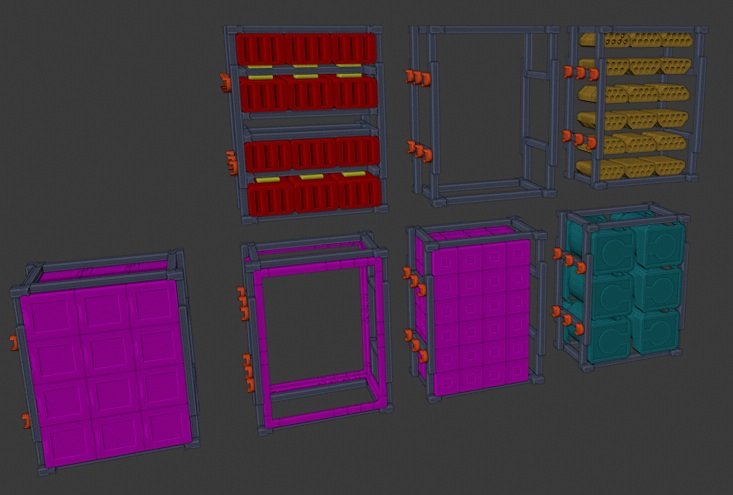 I also quickly put together one segment of heavy carrier, just to see the scale.
It's far from finished, but you can imagine diagonal beams being on all four sides.
Each segment will be 3m long, and fit 4 SC (standard containers). With 20 of those segments it'll be able to transport 80 SC or 20 fighters (or mix, depending on mission).
Rails will be separated with relay, and each segment will be equipped with yolol chip, allowing control over it's cargo beams from hangar, docked ship and the bridge.

All equipment necessary for ship operation will be located in the four corners. Top and bottom will hold bridges and turrets. Sides will contain maintenance corridors, manoeuvring thruster access, fuel and generators.

Most of the ship will be very lightly armoured. It's support ship after all, not meant for direct combat. Only critical components will be durable enough to ensure that no stray shot can blow up the ship. 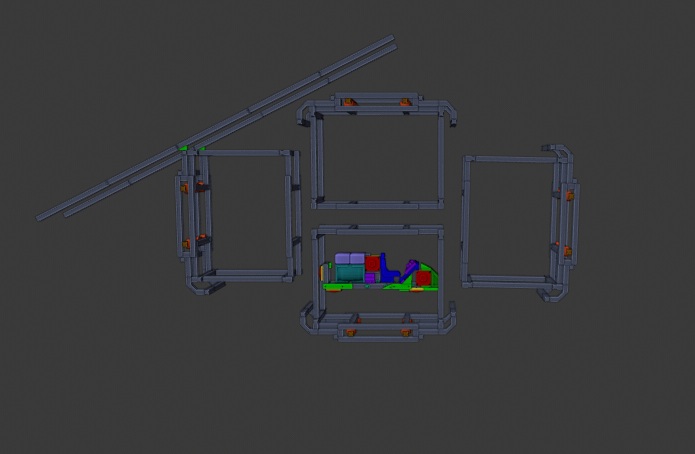 I like the ideas, and I think there is some real potential with this design. I just want to point out that you'll have to do a lot of complicated wiring among other things, if you want to have all three cockpits able to fly the ship. If you ever wanna drop by and have a look at Skyjak, I think you'd fit right in.

Making several cockpit is easy. It's just naming device fields to match FCU + some form of cutting them off with network relays.

Those designs evolved quite a bit since I started modeling ships with blender. For more recent stuff visit discord, and search for my posts with pictures.